It began in late 2015 when O’Connor was approached by the Alabama-Mississippi chapter of the National Multiple Sclerosis Society. The organization honors local donors by commissioning public artwork in their honor as part of the Legacy of Leadership Award. The 2015 recipient, Don Logan, asked that instead of memorializing him that the legendary Mays have a statue erected in his honor.

“I realized intimately that this is one where I had to give everything I had and it still might not be enough,” O’Connor reflected the night before the statue was unveiled at Regions Field in downtown Birmingham. 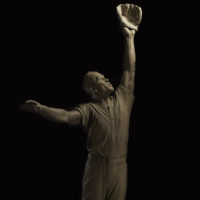